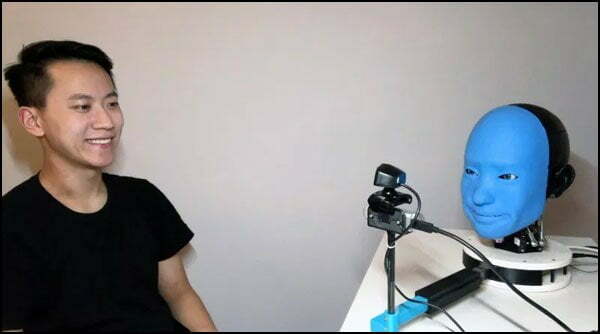 Engineers at Columbia University have invented the humanoid soft-faced robot “EVA”. That can express human impressions and emotions with its face.

It should be noted that the human face has 42 muscles. Which we use in part to express different emotions and impressions.

Eva’s face resembles that of an adult human, made using a soft rubber, 3D printer.

The rubber face is mounted on a skull, while the back is attached to the motors by means of thin wires in several places.

To show a particular impression or emotion on the face, these motors are rotated in a certain order to create different tensions in different parts of the face.

This mechanical skull was trained with artificial intelligence so that it could produce the desired impressions. And emotions from the regular movement of motors and specific stresses on different parts of the face.

For this purpose, “Eva” was taught to imitate a human being through dozens of impressions and emotions on hundreds of human faces. At the moment, this robot face can express anger, boredom, fear, joy, sadness, sadness, surprise. And dozens of other human emotions.

To mimic human impressions, the robot uses a camera to take a picture of the person sitting in front of it. And its neural network identifies what emotion or impression is present on that person’s face.

It then searches its database and brings the same impression to its machine face.

Although the “EVA” robot has no specific practical application at the moment. The engineers who built it say that in the future the same technology will be used to make robots that look not only human-like but also reality. Their faces will also be full of human emotions.

Blinking and smiling robots like humans have been created before. But “Eva” is the next step in the research that has brought the emotionally charged machine face closer to reality.

How to Use Snapchat Dark Mode on iOS

Xiaomi’s 200W Charger Can Recharge a Phone in 8 Minutes