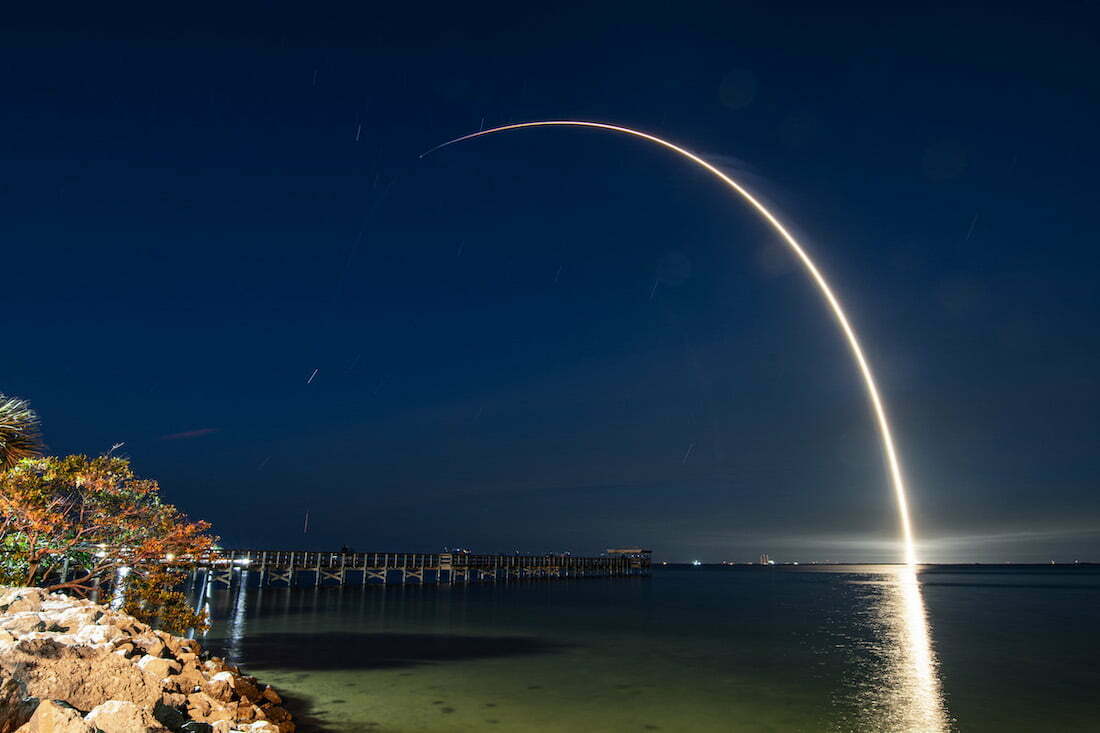 SpaceX broke the record for most Falcon rocket operations in a year on Thursday, successfully launching 48 Starlink broadband satellites and two BlackSky optical Earth-imaging spacecraft into orbit from Cape Canaveral.

The Falcon 9 cleared the coastal launch facility with an orange glow, followed by a ground-shaking rumbling, and arced downrange northeast over the Atlantic Ocean. With 1.7 million pounds of thrust, nine Merlin 1D main engines used a mix of kerosene and liquid oxygen propellants to launch the rocket into a clear late October sky.

More than two and a half minutes after liftoff, the first stage, which was 15 floors tall, shut down its nine engines and separated from the Falcon 9’s upper stage. The 50 satellite payloads were then driven into a parking orbit by the upper stage’s Merlin engine less than 10 minutes into the mission.

Meanwhile, the Falcon 9’s reusable booster stage coasted to the top of its ballistic trajectory before crashing back into the atmosphere at a speed of almost 5,000 mph per hour (8,000 kilometers per hour).

Braking operations involving three, then one, of the first stage’s engines, slowed the booster enough for a precise touchdown on SpaceX’s football-field-sized drone ship “A Shortfall of Gravitas” in the Atlantic Ocean east of Charleston, South Carolina.

After its ninth flight to space and back, the first stage, dubbed B1060 in SpaceX’s fleet, returned to Earth. The drone ship will dock with the booster on Florida’s Space Coast, where SpaceX will inspect and restore it for a future launch mission.

Downrange in the Atlantic Ocean, a SpaceX recovery ship was stationed to rescue the two parts of the Falcon 9 rocket’s payload fairing, which the company also reuses. On Thursday night’s mission, the fairing shells were brand new.

The top stage of the Falcon 9 rocket coasted halfway around the world, passing over Europe, the Middle East, and the Indian Ocean before re-igniting its engine approximately an hour into the mission near the coast of Australia.

That cleared the way for the mission’s last step, the satellite deployment sequence.

The rocket first fired the two 121-pound (55-kilogram) BlackSky satellites that were affixed to the top of the Starlink satellite stack. At T+plus 63 minutes and T+plus 67 minutes, the twin satellites detached from the rocket, each carrying an optical imaging telescope for Earth observations.

At 7:41 p.m. EST (0041 GMT), approximately 89 minutes after liftoff, the upper stage released the cluster of Starlink internet stations while flying outside the range of SpaceX ground stations. When the rocket sailed over a tracking point at SpaceX’s Starbase complex in South Texas a few minutes later, the corporation confirmed the deployment of the Starlink satellites.

On Dec. 9, NASA’s Imaging X-ray Polarimetry Explorer, or IXPE mission, will launch from pad 39A at Kennedy Space Center. The IXPE spacecraft is equipped with three X-ray telescopes that will study the circumstances surrounding black holes and neutron stars, which are among the universe’s most severe settings.

On Dec. 18, another Falcon 9 rocket will launch with the Turksat 5B geostationary communications satellite from Cape Canaveral Space Force Station. From Kennedy Space Center, a SpaceX cargo mission to the International Space Station is set to launch on Dec. 21.

Later this month, SpaceX could launch another Falcon 9 rocket from the Vandenberg Space Force Base in California. That mission, which will deliver another batch of Starlink satellites into orbit, has no set launch date.

SpaceX has transported 1,892 spacecraft to orbit for its privately-funded global broadband network with the launch of 48 additional Starlink satellites on Thursday night. This statistic excludes failed satellites and other Starlink vessels deorbited by SpaceX.

Starlink Group 4-3 was SpaceX’s 32nd Falcon 9 launch since May 2019, and it was mostly dedicated to delivering Starlink satellites to orbit.

The majority of the Starlink satellites launched thus far have landed in a 341-mile-high (550-kilometer) orbit with a 53-degree inclination, the first of five orbital shells SpaceX aims to use to complete the Starlink network’s full deployment. With a series of Starlink missions from Cape Canaveral from May 2019 to May this year, SpaceX completed the launch of satellites in that shell.

SpaceX has been rushing to finish construction of new inter-satellite laser terminals for all future Starlink satellites since May. The laser crosslinks, which have already been tested on a few Starlink satellites during previous flights, will lessen SpaceX’s internet network’s dependency on ground stations.

The ground stations are costly to set up and have geographical — and occasionally political — limitations on where they can be placed. The Starlink satellites will use laser links to transmit internet traffic from spacecraft to spacecraft around the world, eliminating the requirement for signals to be relayed through a ground station connected to a terrestrial network.

Consumers who have joined up for a beta testing program are currently receiving interim internet services via the Starlink satellites.

On a Falcon 9 rocket from Vandenberg Space Force Base in September, SpaceX launched the first batch of 51 Starlink satellites into a 70-degree inclination orbit. At a height of 354 miles, that orbital shell will eventually house 720 satellites (570 kilometers).

The Federal Communications Commission has given SpaceX regulatory certification for about 12,000 Starlink satellites. The company’s initial aim is on deploying 4,400 satellites using Falcon 9 rockets in a series of flights. SpaceX’s next-generation launcher, the Starship, a massive rocket that has yet to reach orbit, could be charged with launching hundreds of next-generation Starlink satellites on a single flight in the future.

The two remote sensing microsatellites that rode the Falcon 9 rocket into space on Thursday night join eight others in BlackSky’s active constellation.

In a statement, BlackSky said that expanding the constellation “would boost the company’s geographic capacity for data while enhancing client revisits rates.”

Two more BlackSky satellites are scheduled to launch in early 2022 on a Rocket Lab mission. The remote sensing company has placed another order with LeoStella, a company situated in Tukwila, Washington, a suburb of Seattle.

BlackSky, based in Seattle and Herndon, Virginia, is deploying a fleet of tiny remote sensing satellites to offer commercial and government clients high-resolution Earth pictures. Within a few years, the business intends to have a fleet of 30 satellites.

The US military and intelligence services are a major customer for BlackSky. NASA, the National Reconnaissance Office, and the National Geospatial-Intelligence Agency have all agreed to sell commercial imagery to BlackSky.

Customers in transportation, infrastructure, construction, and supply chain management, according to BlackSky, make up the commercial market for its services.

Each of the existing BlackSky Global spacecraft can take up to 1,000 color photographs each day at a resolution of around 3 feet (1 meter). BlackSky plans to launch the third generation of satellites with a resolution of roughly 20 inches (50 cm) in the future.

The company processes and analyses imagery returned to Earth by BlackSky satellites using artificial intelligence and machine learning techniques. According to BlackSky, the algorithms can recognize and identify items in photos without involving people.

SpaceX sells additional capacity on its Starlink missions to provide external clients with comparatively low-cost rides to space. Transporter missions, which carry dozens of small satellites from a variety of US and international customers, are also launched by the launch firm.

BlackSky, a repeat customer with SpaceX, had its rideshare launch service managed by Spaceflight, a Seattle-based company. Previous Falcon 9 missions have launched three BlackSky satellites, including two on a Starlink launch in August 2020.

According to SpaceX’s website, launching a 440-pound (200-kilogram) satellite on a rideshare mission costs $1 million. That’s a lot less than any other launch service, including small satellite launchers like Rocket Lab’s Electron.

Rocket Lab and other smallsat launch businesses, on the other hand, can launch satellites into orbit on customised flights, providing operators greater options for altitude and inclination.