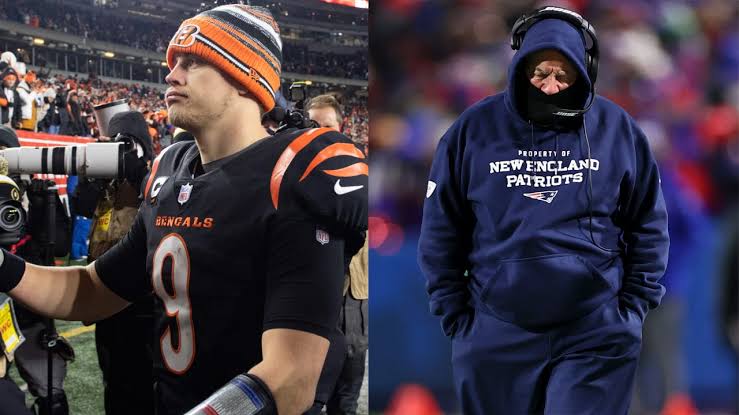 The city of Cincinnati: In the first quarter, the largest crowd in Paul Brown Stadium history caused three Raiders false starts, never sat down, and never let up. This seemed like an exorcism for the Bengals, as it helped them win their first playoff game in 31 years. Coach Zac Taylor of the Bengals presented the entire city with a game ball.

Joe Burrow: Go find the video of Burrow’s second-quarter in-stride rope to C.J. Uzomah for a 29-yard gain that whizzed right past Divine Deablo’s ear. Or the leaping touchdown pass as he was about to go out of bounds (set aside the fact it should have been waved off because of an inadvertent whistle). Or his telepathic communication with Ja’Marr Chase, who had nine catches for 116 yards. Burrow threw for 244 yards and two touchdowns on 24-of-34 passing in his first postseason game, and his calm post-game manner implies he knew what to expect. The rest of us should be prepared as well. The Bengals now have a top-five quarterback.

The Bills: Their thrashing of the Patriots served as a stark reminder of Buffalo’s masterful team-building efforts since 2018, when the Bills had a rookie quarterback in Josh Allen and a lot of money being paid to players who were no longer on the team. With this trampling, it was difficult not to feel like the Bills were sending a message to the rest of the AFC East. Since losing the AFC Championship Game at Arrowhead Stadium last year, the Bills have been referring to the Chiefs as the kings of the AFC hill. The Bills have won five straight games, but their two greatest performances of the season were against the Patriots in their final two games of the regular season — they struggled mightily at home against the Falcons and Jets in the final two games of the regular season. Now it’s time to play like this against a team that’s even better than the Patriots the next week — most likely the Chiefs.

Josh Allen: There was nothing the Bills quarterback couldn’t do on Saturday night. He rifled passes, he broke ankles. Allen was a one-man wrecking squad, throwing for 308 yards and rushing for another 66, but the Bills’ offence was unbeatable as a whole. They ran out to a 27-0 lead after scoring a touchdown on each of their four first-half possessions. The Bills placed a premium on getting out to an early lead in order to force the game into Mac Jones’ hands. Done. Then they continued on their way. Since early in the third quarter of the first meeting between these teams this season, the Bills haven’t punted against the Patriots. The Bills concluded the game with a perfect offensive effort, scoring a touchdown on each and every drive until they were forced to kneel down. Harrison Phillips, a defensive tackle for the Buffalo Bills, gushed over the offence, stating, “That sounds like something from Pop Warner. It’s possible you did it on Madden.”

Micah Hyde: Despite an amazing overall defensive performance, the Bills safety is singled out for one of the most athletic and timely plays you’ll ever see. On the first possession of the game, with the Bills ahead by a score but the Patriots moving the ball at will, quarterback Mac Jones had the Patriots with a first down at the Bills’ 34-yard line. He sent a pass to Nelson Agholor, who was streaking down the left sideline into the end zone, wide open. Hyde saw an opening and dashed to where Agholor would have collided with the pass. Hyde, who had been following the ball all along, made a Willie Mays-style catch, turning a definite score into a jaw-dropping interception that put an end to the Patriots’ early momentum. The Patriots’ offence never found its stride again.

Bengals’ red zone offence: It’s strange to say this about a winning team, but the Bengals left too many points on the field, settling for field goals after a Derek Carr fumble and after starting a drive on the Raiders’ 45-yard line, allowing the Raiders to stay in the game after the Bengals dominated the first half. Later, with less than 7 minutes remaining, a long drive stalled on the Raiders’ 25-yard line and another on the 10-yard line, with a chance to give the Bengals a two-touchdown advantage. The Bengals got away with it against the Raiders, but as they progress and face more difficult opponents, their red-zone woes may resurface.

The Raiders: A great opportunity to steal a win was squandered, especially against an injury-riddled defensive line that was getting little pass rush near the conclusion of the game. The Raiders are heading into an offseason that will most certainly entail big changes after concluding the season with a fourth-down interception from the Bengals’ 9-yard line — then wasting a down by spiking the ball with 29 seconds left. Rich Bisaccia, the Raiders’ interim coach, did an amazing job of keeping the team together and bringing them into the playoffs after a season filled with adversity, but the Raiders are likely to conduct a complete coaching search. The Raiders and Derek Carr will then have to make decisions about his future.

Officiating: It’s never a good sign when the league announces during a game that it will issue a statement on a contentious call. The statement was prompted by an unintended whistle after a Bengals touchdown pass, which stated that the whistle came after the touchdown catch was made, despite video review indicating that this was not the case. Beyond that, the game’s management was a shambles (officials granted the Raiders a timeout as the Bengals snapped the ball, then ignored what seemed to be a late hit on Burrow on the same play, for example). Officiating should never be the focus of attention following a game, let alone a playoff game. Alas.

The Patriots: A humiliating performance, especially on defence. Allen ate up man-to-man coverage, and Matt Judon was snubbed on a 26-yard Allen run early in the game. The pass rush’s decline was a major factor in their demise; they only had two sacks in their previous four losses. Those strong defensive numbers from the regular season — second in points allowed and fourth in yards allowed — were bolstered by lesser opponents. The Bills, on the other hand, made the Patriots seem sluggish and revealed a dearth of covering guys.

How to Get the Armamentarium in Destiny 2