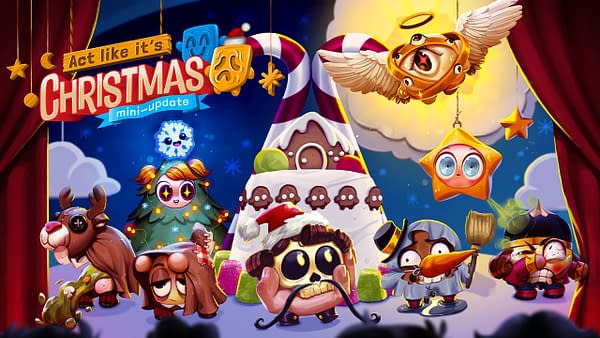 Those Awesome Guys, an indie developer and publisher, has released a new update for Move Or Die that adds even more wacky festive fun. In an event named “Act Like It’s Christmas,” the team has introduced many new characters to the mix, as well as some fun holiday-themed challenges that you can tackle to discover who is the best in your group. The team also disclosed what they have planned for 2022, indicating that there would be more upgrades to keep the game fresh. More information regarding the upgrade may be found below.

Five new characters make their theatrical premiere, and they’re all difficult to follow. We’ve got a reindeer’s front and back ends, a kid in an overly complicated Shakespearean costume, and, because it’s Christmas, a Bible-accurate angel to keep an eye on you as you sleep. Even though it’s just a youngster in a costume, the terror is palpable. In addition, a one-of-a-kind character will be introduced to the Move or Die roster. Deepflake is a one-of-a-kind character who won’t be appearing in the Debt Bar or Not-A-StoreTM, but will instead be given away for free to anyone who plays an online multiplayer match between December 22nd and January 5th.

This year, we focused all of our efforts and resources on ensuring that the game receives a consistent stream of cosmetics and competent localization work. While this was a major event for us, we’re reiterating that we hear you loud and clear. You desire NEW GAME MODES and MUTATORS, as well as other methods to make your Move or Die experience more interesting from a gameplay aspect. While the rate at which we update the game may decrease a little in 2022, we are 100% committed to introducing at least three new game modes (which are already in production) as well as a number of new mutators to make them even more insane. In 2022, we’ll also focus on addressing a number of long-standing flaws and bugs that have plagued the game for the past few years. Yes, this includes a bunch of additional stability issues for all platforms, including the Shuriken Parry issue, the famed audio glitch, and a slew of other classics like the Shuriken Parry issue (Linux included).