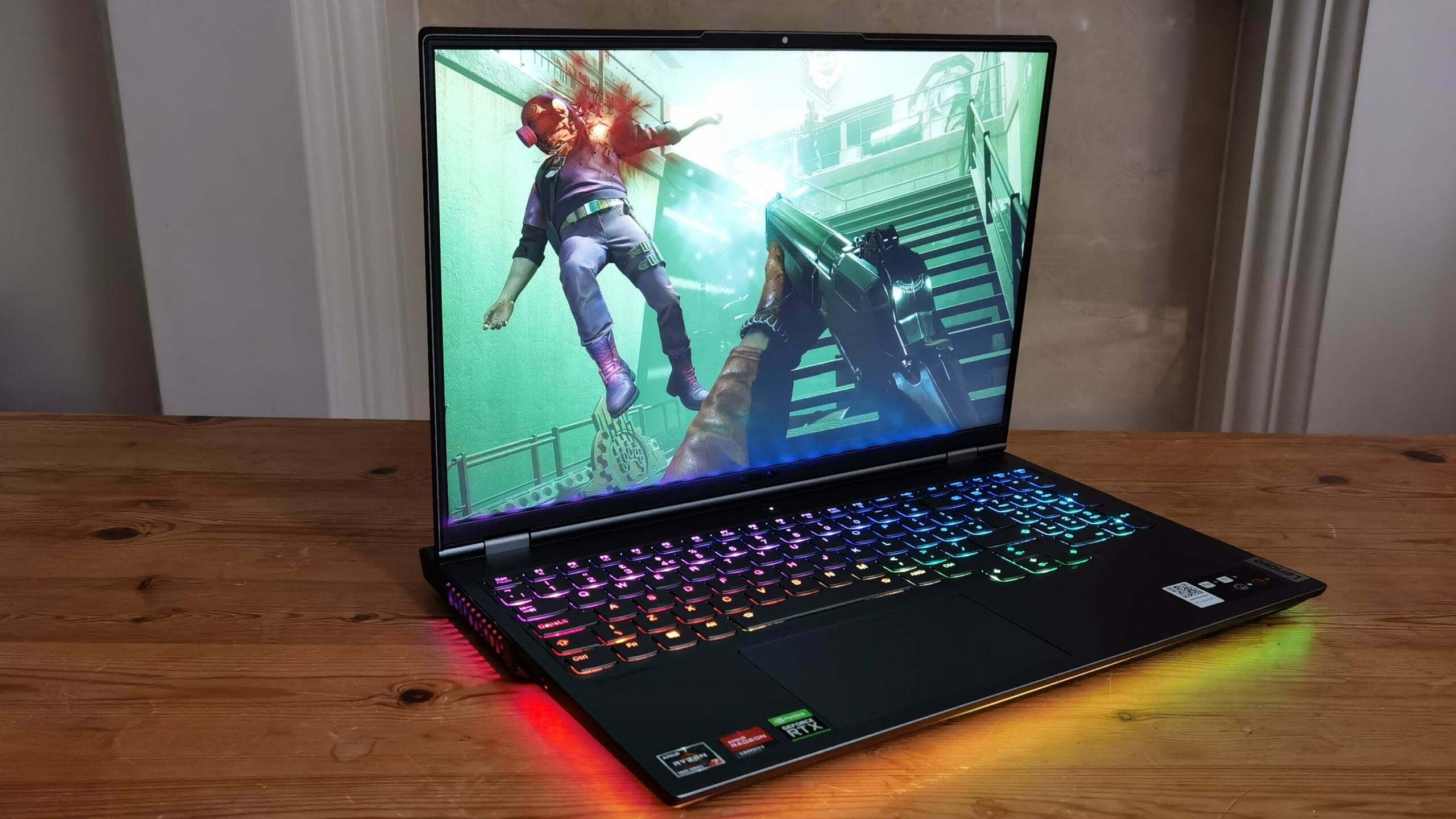 1. Battery life is lacking, 2. Expensive, 3. On the heavier side

The Lenovo Legion 7 (Gen 6) is an excellent laptop that performed admirably in (nearly) all of our tests. This is a computer you should really consider if you’ve saved up enough money and want to update your gaming setup to one of the best available.

Fans of RGB lighting will appreciate the numerous customization possibilities available across the laptop’s entire exterior shell, allowing you to give your gadget its own distinct glow. Even with the illumination switched off, the sleek case looks attractive, providing you with a more professional impression if you require a device for both works and play.

The Legion 7 laptop, which was powered by an RTX 3080 GPU and an AMD Ryzen 7 5800H CPU, scored well in all of our performance tests, outperforming most of the devices on our best gaming laptops list.

It only failed in one area: the battery life was drained terribly quickly by these outstanding components. If you don’t plug it in, you’ll only get around three hours of ordinary use out of it, and we estimate it’ll be significantly less if you’re gaming on high settings.

The fan noise is also rather loud (as is typical of gaming laptops in general), as the fans have to work hard to keep the Legion 7 cool – albeit it does become quite hot during intense gaming sessions.

You can upgrade from our specs to models of the Lenovo Legion 7 with up to 32GB of RAM, up to 2TB of SSD storage, and an AMD Ryzen 9 5900H CPU for a little extra money.

In contrast, the Asus ROG Zephyrus G15, our best-reviewed gaming laptop, costs roughly $1,799 (the one we received was limited to the US), but its features and performance aren’t as good as the Lenovo Legion 7. If you wanted a G15 that was more in line with the Legion 7, you’d spend roughly the same amount on either laptop.

The Lenovo Legion 7 is frequently out of stock or in short supply due to the high demand for RTX 3080 GPUs. If you want to get your hands on one of these computers, you’ll need to act quickly.

The Lenovo Legion 7 exudes quality, with a sleek design and subtle RGB lighting that runs the length of the machine. The keyboard not only changes colors, but it also syncs with lighting strips that wrap across the front of the laptop as well as within the side and back vents.

The crosshair in the Legion emblem on the lid also shines with RGB lighting, providing a uniform glow that will make your PC gaming opponents jealous.

You’ll also appreciate the 16-inch QHD (2560 x 1600) display with Dolby Vision and Nvidia G-Sync support on this laptop. While the resolution isn’t quite 4K (this laptop is 2.5K), it still looks excellent, and with a maximum refresh rate of 165Hz, you’ll be able to appreciate the high framerates this machine can offer.

This laptop’s outstanding number of ports will more than meet your demands if you prefer to use a lot of devices. A USB-C port (USB 3.2 Gen 2, DisplayPort 1.4) and an audio port for headphones are located on the left side.

The Legion 7 comes with two 2W Harman speakers with Nahimic Audio, which are a little disappointing in terms of audio quality. For videos, the performance isn’t bad, but if you want to hear what’s going on clearly when gaming, you’ll probably need to use a headset.

That’s because the Legion 7’s fan works hard to keep it cool during long gaming sessions, even if it’s losing. Because this laptop can become quite hot while gaming, we recommend using it on a table rather than on your lap.

The Lenovo Legion 7 laptop delivered more than we expected, thanks to its AMD Ryzen 7 5800H processor and Nvidia GeForce RTX 3080 graphics card.

The Legion 7 fared admirably in our CPU testing, with 1,407 single-core and 7,336 multi-core scores in Geekbench 5, and the pattern continued in the Total War and Metro Exodus performance tests, with the Legion 7 delivering a buttery smooth framerate even at ultra settings.

This kind of performance, though, comes at a price, and we’re not just talking about the ones you’ll pay with your wallet.

Even with moderate use, the Lenovo Legion 7’s battery will swiftly drain due to its strong components.

These results aren’t bad compared to certain gaming laptops, but we’ve heard times of up to eight hours from other outstanding devices, making the Legion 7’s three-hour battery look a touch underwhelming.

You shouldn’t have too many issues as long as you have your power cable with you.

The Lenovo Legion 7 has a 720p webcam with an E-shutter that can be turned off to provide you privacy.

While the webcam isn’t the best in the world – it suffers considerably in gloomy environments – it can produce a good-looking image if you offer some lighting.

The built-in microphone isn’t horrible either; during test calls, we were assured we were clearly heard – however with the fan noise during gaming, you might be better off using a separate headset or microphone if you need to interact with your squad.

How can I view everyone in Google Meet at the same time?