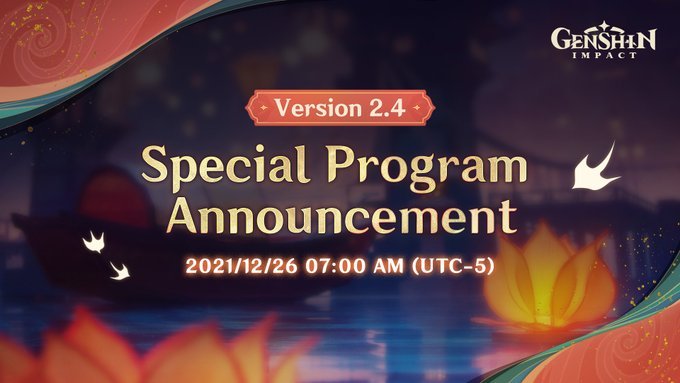 Fans of Genshin Impact will get a Christmas surprise from miHoYo this weekend, as the publisher will host a special live stream to introduce the game’s version 2.4! The webcast will commence at 7:00 a.m. UTC-5 on December 26th. The stream, which will be broadcast live on Genshin Impact’s official Twitch channel, will cover the game’s most recent update. MiHoYo has not provided fans any particular details about what to expect during the stream at this moment, however, there could be some fresh information on the skins for Keqing and Ningguang that have been speculated for months!

The tweet that announced the event is embedded below. The official Twitch channel for the game can be found right here.

Hopefully, the event on Sunday will be a thrilling one! Fans of Genshin Impact have already expressed their excitement in response to the Tweet above. Players have already made wish lists for version 2.4, ranging from the addition of the aforementioned skins to wishes for specific re-runs. It’s possible that miHoYo will provide some teasers between now and the start of the Livestream, but it looks like fans will have to stay guessing until then!

Of course, miHoYo won’t be able to please all of its fans, and there’s a strong probability that some of those specific fan demands may be met with disappointment. The game’s ardent fans, on the other hand, will likely be content as long as the game continues to provide reasons to stay invested. It’s not simple to keep gamers returning to continuing games, but Genshin Impact has certainly figured out how to appeal to a global audience. Version 2.4, hopefully, will continue to do so.

Genshin Impact is now available on PlayStation 4 and PlayStation 5, as well as PC, iOS, and Android.