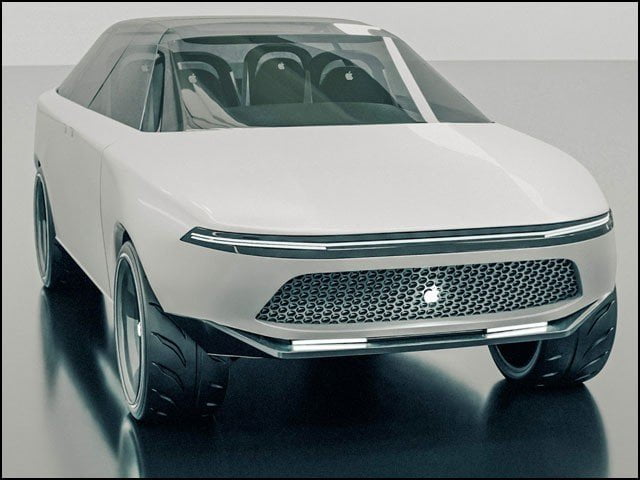 It is almost certain that Apple, which has a reputation for its iPad and iPhone, is preparing to launch an i-car in the same style as the electric one.

Although work on the project has been going on for the last seven years, not much is known about it and all this work is being done with utmost secrecy. The car is expected to go on sale by 2025.

Vanarama claims that the design is accurate and factual, as it is based on patents that Apple has obtained from the US Patent Office over the past few years.

However, patent numbers US10309132B1 and US10384519B1 are considered the most important, the first of which relates to the exterior design of the car while the second patent relates to the interior of the car such as dashboard, windscreen, and seats, etc.

The U.S. Patent Office’s website has not been able to confirm either of the two patents, but the technology-related international community is still considering the report credible.

According to Vanarama, the car will also be fitted with an automatic alcohol meter which will detect whether the driver is intoxicated or not while sitting.

Looking at the 3D images of the ‘Apple iCar’, it looks as if the iPhone has been modified to fit the wheels underneath it.

The door handles are shaped like the buttons of an iPhone, while the white color of the car is exactly the same as that of the iPhone 4 in 2010.

The Apple iCar’s windscreen will be similar to a large smartphone screen in that the front view and other travel information can be viewed simultaneously.

The car seats will be flexible but strong enough to be rotated, while the dashboard will also be fully “customizable”, meaning the driver will be able to change the dashboard at his convenience.

Vanarama’s claims are valid, but this 3D design is nothing more than an estimate.

What will the Apple iCar actually look like? The final answer lies with Apple Corps, which has kept quiet about it.

How to Install Spotify on Linux